As you know, if you have been reading this blog over the past year, I am in the middle of a two-year Sloan grant to create a new way of accessing the Isis bibliographic data for researchers around the world. This post is the first of several that will update readers on its development. 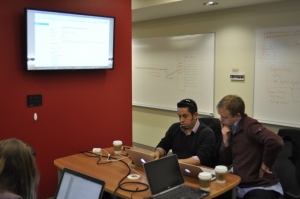 In the Digital Scholarship Laboratory at the University of Oklahoma.

Two weeks ago, from February 16 to 20, the two teams working on the IsisCB Platform met in Norman, Oklahoma, for an extended bootcamp to crystalize some of its features. The University of Melbourne team from the E-Scholarship Research Centre (ESRC) was composed of Gavan McCarthy, Marco La Rosa, and Ailie Smith, and on the University of Oklahoma side, Stephen Weldon and Sylwester Ratowt. We worked on the data structure, the search application, and the display pages of the Isis data that are the backbone of the system.

We met in the new Digital Scholarship Laboratory (DSL) in Bizzell Library, which was perfectly equipped for a meeting of this sort. The DSL has good wireless capability, a large overhead display screen to show individual work on people’s laptops, two walls of whiteboards for developing ideas, and even storage cabinets for the visitors to use during the weeklong stay. The setup was ideal for working with the project: the programming team could write code and display the results in real time as others of us fleshed out the applications and tweaked designs, sketching out our thinking on the whiteboards.

The five days led to intense discussion and design of the project, during which time we worked through most of the details of the system to be deployed later this summer. The complexity of the data and the sophisticated expectations for historical search presented a number of challenges to us as we worked to create an efficient user-friendly design.

We grappled with two primary challenges at the bootcamp. The first concerned the search app and navigation, in which we tried out different ideas for faceted searching on this complex and large dataset, made especially difficult by a faceted system that had thousands, and in some cases tens of thousands, of elements. 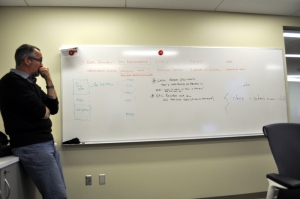 Gavan McCarthy thinking through long-term plans for data integration on the IsisCB Platform.

The search app is run on the popular Solr Lucene system, a common open-source enterprise search engine designed for faceted browsing. These Solr-based faceted search systems are commonly seen on business sites, but they are increasingly used by data discovery services such as ours, and they bring with them both flexibility and power. The Portal to Texas History is one example of the kind of application that can be developed with this system.

A second challenge for us was to develop a visual display of individual records that was efficient and aesthetically appealing but also one that provided internal links to related pages. This display problem, in other words, had two distinct aspects: how to display the citation or authority information (which includes content that varies widely from record to record); and how to create a navigation system within the pages that would reveal the underlying data graph.

Since designs for both the search application and bibliographic record display have been developed for similar academic projects elsewhere, it might seem like this would be relatively easy to set up. That is not the case. The design for each platform requires careful thought about each platforms unique data structure as well as clarity about the project’s purposes and long-term goals. Also, we did not want to replicate resources that already existed. The new platform, we decided, had to have some unique features.

I will explain some of those features in the next few posts.